Meaning of colors for the indigenous Wayúu The Wayúu indigenous people have a culture rich in awareness of everything that surrounds us, from the design of their bags to the choice of their colors. The latter have a great meaning that we tell you in this blog!

How did the Wayúu indigenous people obtain colors?

In ancient times the Wayúu had large cotton plantations, a raw material that was used to make Wayúu bags, hammocks and other items.

When cotton was grown in the region, the first step was to harvest once a year; they did this collectively which was called "yanama." There, women and men from other communities gathered for the extraction process.

At the time of dyeing this raw material, the main dyeing plants used were Palo de Brasil and Dividivi.

According to Artesanías de Colombia, different species of these trees were used: “H. brasiletto Karst, H. campechianum and H. dinteri. According to the Artisans, the first, characterized by a head full of channels and a red heart, is the one that gives the vinous red color and the second, with a smoother rind and a lighter heart, gives a tan yellow color. "

Colors and their meaning

Have you thought about a hierarchy of colors? Well, for the indigenous Wayúu it exists.

The classification of colors for the Wayúu is based on the importance of their meaning.

A color can be attributed several meanings, so this basically adds points to have a higher category on the scale of importance.

The most important colors for the Wayúu are:

This color has a great load of religiosity for the Wayúu indigenous people. The color is associated with the Isho’ui stone, or protective stone.

Isha, which for the Wayúu means Blood, therefore Life; it is an element that is loaded with great symbolism because life for the Wayúus is sacred.

Another important element that is associated with blood is the shedding of blood. It is known that the Wayúus are peaceful indigenous people who live in community and withdrawn from one another.

When there is a confrontation and there is bloodshed, different actors of the community come to discuss such as the Wordman, the interpreter and the affected parties.

In this discussion, a payment or compensation is agreed for damages caused by that blood that was spilled.

This compensation is known as Isho’upunaajana and is part of the Wayúu normative system.

Another meaning associated with the color red is the Kuluulu Ishosü. This is a red cloth used in confinement rituals. That is a process where the girl who got her first menstrual period is kept at home, to teach her everything she needs to know as a woman.

Red is the most predominant color in this culture due to its different symbolisms. It is present in all the garments and arts that the Wayúu develop: hammocks, bags, necklaces, among others. 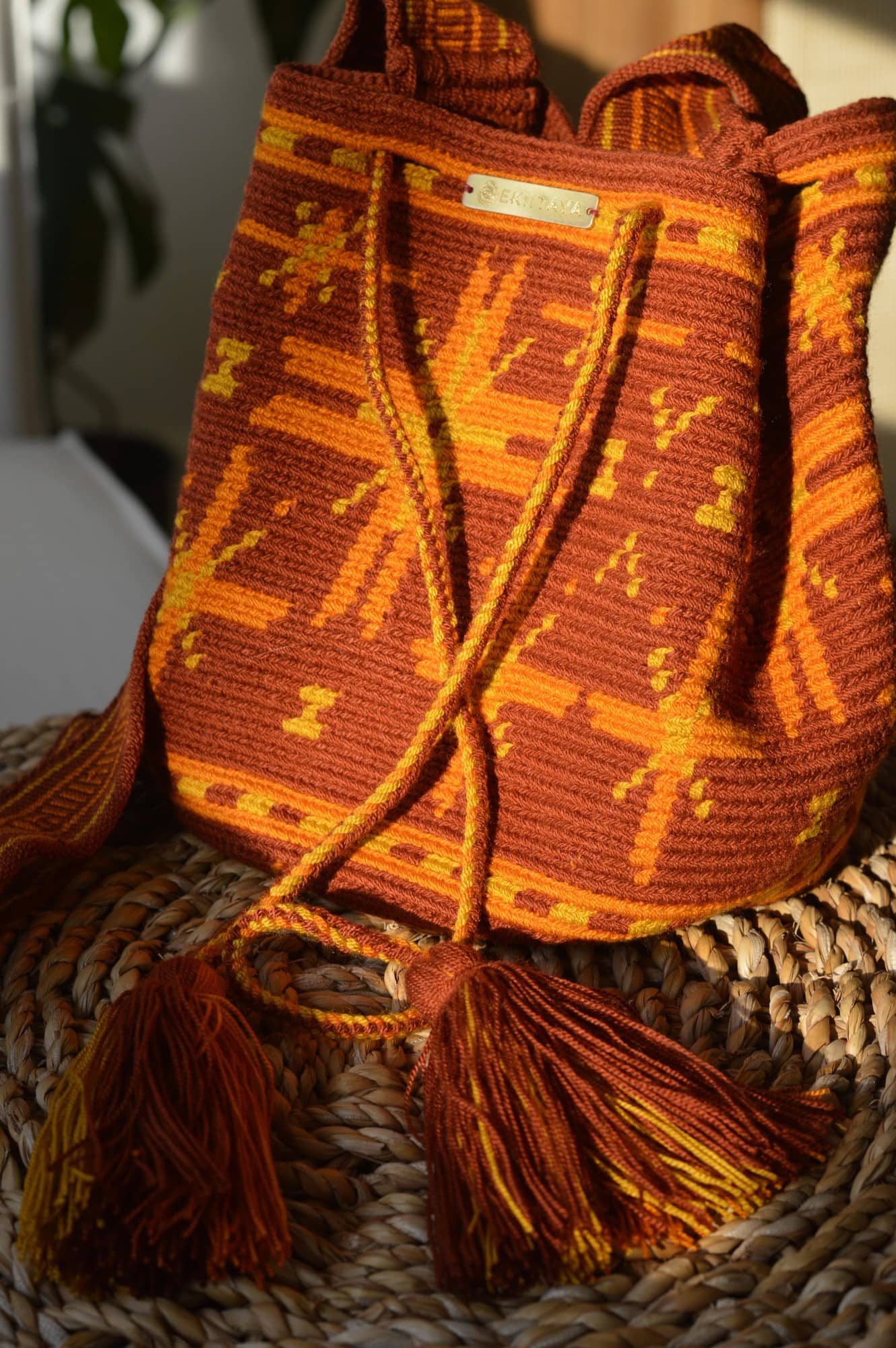 It represents the warmth of the Wayúu population, as well as the region where they live.

The Wayúu live in La Guajira, the region of Colombia characterized by its desert, dunes and the sea.

The yellow of its sand contrasted with the blue sky is an almost heavenly landscape.

Yellow also represents the sun, which sometimes is not the best ally for the summer season, but it is undoubtedly an element that serves as a guide for the Wayúu.

The blue color symbolizes the Wayúu narrative and stories.

Being a community that passes knowledge through stories, from generation to generation; the color blue is meaningful. 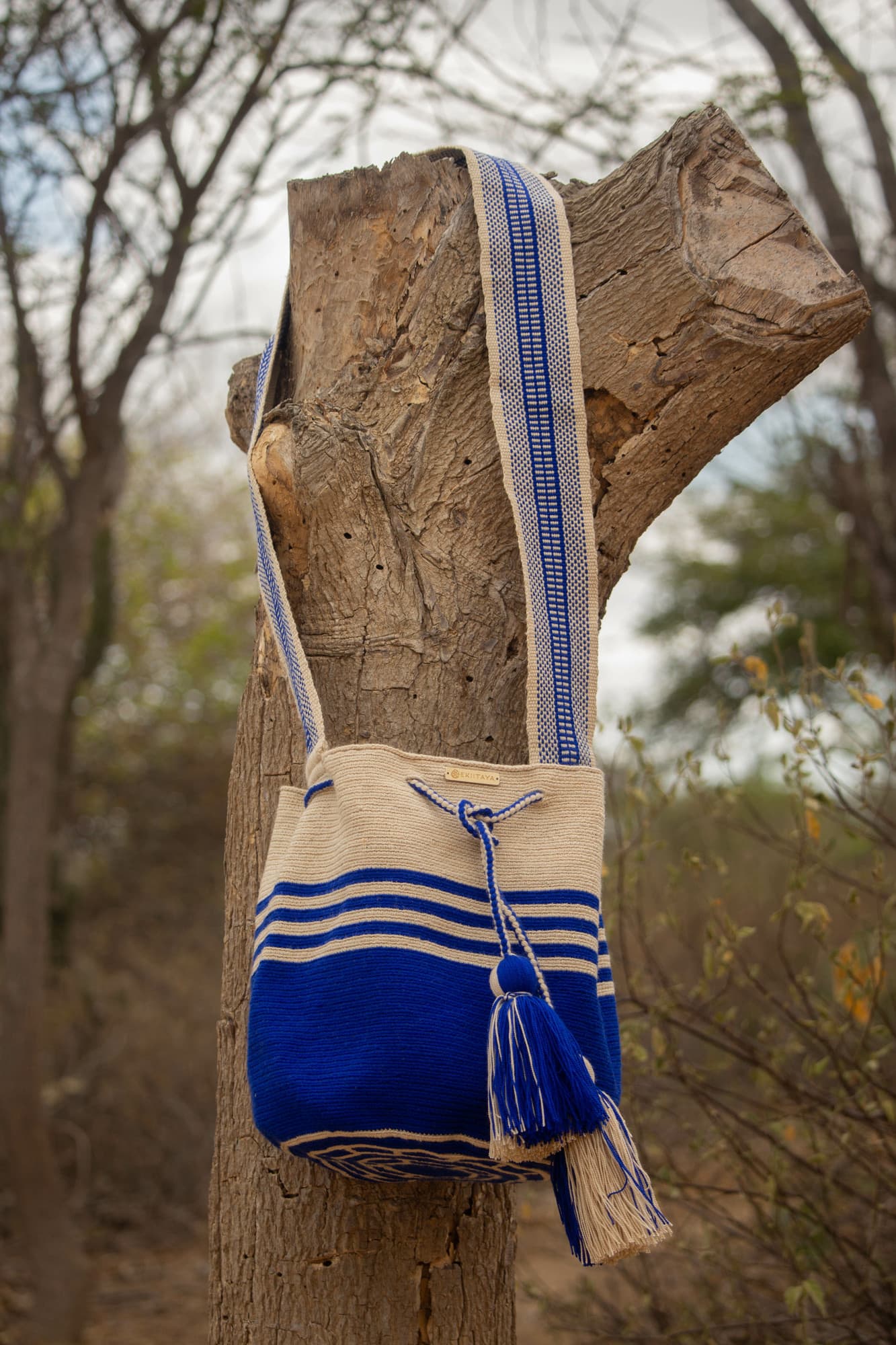 This color is also associated with Juya, the god of rain.

His presence in the form of rain favors the abundance of the various crops, with which the closest relationships are established between the Wayúu and their own environment.

It is associated with the cactus or cardon.

This is the emblematic plant of the Wayúu culture because it is not only the main material for the construction of their houses, but it also represents the first children of Mma.

Mma is the goddess of the earth and the most important among all the gods that are part of the Wayúu worldview.

The cactus is a perennial plant that resists the harshest droughts and grows wild in La Guajira.

For western culture, green represents hope. I think that is precisely what the cactus demonstrates. It is a plant that grows with the minimum resources for its survival, but shows it can do it despite everything.

Brown represents the vastness of the earth.

Mma is the goddess of the earth and the mother of the Wayúu.

She represents the force of nature, femininity and the Wayúu woman.

This philosophy is also represented in the Wayúu bags.

The sun surrounding the earth forms a spiral, which is represented at the base of the bag. This form is the basis for the Wayúu worldview. It is where everything that is to be Wayúu is born.

At present the Wayúu obtain the threads of great diversity of colors from the merchants of the area. They are threads of industrial production in acrylic fibers (threads or wool) or natural (threads or yarns in cotton).

This diversity of colors has undoubtedly made a great impact in the creativity and design, which is now reflected in the Wayúu bags. 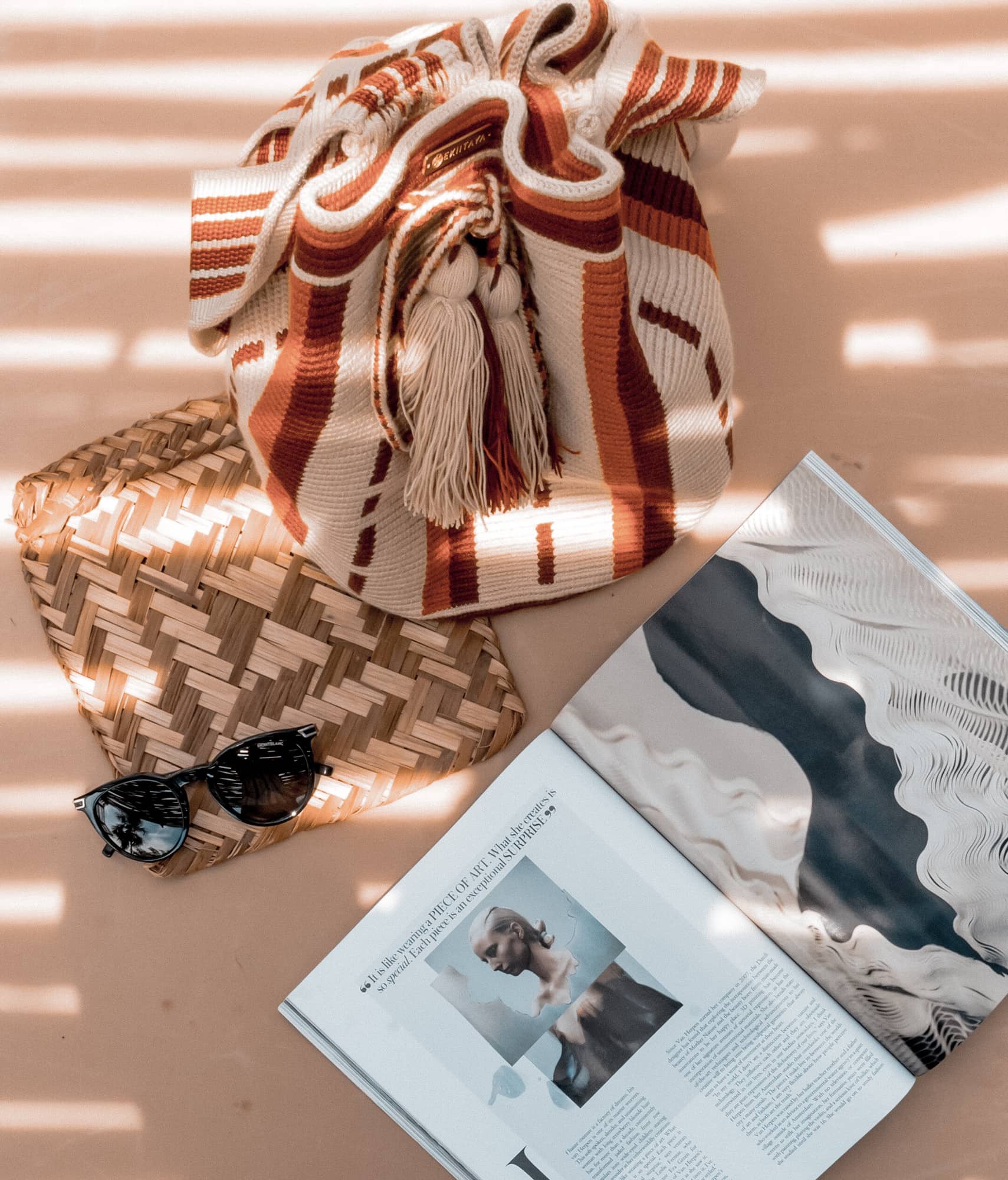 At Ekiitaya we have taken advantage of this diversity to create many designs that intertwine the Wayúu worldview with modernity.